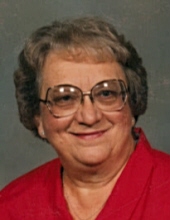 Donna Mae Gibbs, 81, of Melbourne, IA passed away Friday, December 13, 2013, at the Iowa River Hospice Home in Marshalltown, surrounded by her family. Funeral services will be held 10:30 a.m., Tuesday, December 17, 2013, at St. John's United Church of Christ, in Melbourne. Visitation will be 5:00 p.m. to 7 p.m., Monday, December 16, 2013, at the Main St. Chapel of the Anderson Funeral Homes, in Marshalltown. Interment will be at Melbourne Cemetery. Further arrangements are pending at the funeral home. Online condolences may be sent to www.andersonfhs.com


Donna was born June 5, 1932 to Ervin and Viola (Hamler) Vogt, in Van Cleve, IA. She graduated from Rhodes High School in 1949. Donna attended UNI Teaching College and received her BA in teaching from Drake University. She taught school at Waverly, Scranton, Baxter, and Dunbar. Donna was united in marriage to Eugene Gibbs on October 3, 1958, in State Center, IA. She taught briefly at Melbourne and West Marshall before becoming a homemaker. They lived in the Baxter and Rhodes area before settling in Melbourne in 1961. Donna was a member of St. Johns United Church of Christ where she was the church secretary for many years and was actively involved in Womens Fellowship and other church activities. She sat on the boards of the Central Association UCC and the Melbourne library. Donna was also a member of Rhodes Rebekah Lodge, the Melbourne Volunteer Fire Department Auxiliary, Navy Mothers, Fortnightly Club, and the 50+club. She truly loved her family and community.

Great Lady, Great Life. Sending my love to all of you during this time. We will send a memorial contribution to the Iowa River Hospice Home in her honor. Michael, Gabrielle and Bailey Hamler. Manhattan, KS.

To the Gibbs families, We are sorry to hear of Donna's passing. Our thoughts and prayers are with you. Jeff, Annette, Nick and Megan Lanning

Dear Peggy, Doug, and Carol--So sorry to hear of your loss. Your mom/sister was such a sweetheart. I remember all those times of visiting with Donna & Gene during wrestling meets in high school. I had the opportunity to visit with Donna a few years ago after we had returned to Iowa and get caught up on the family. She will be missed. You are in my prayers, Carol (McDonald)Tripp

Dear Gibbs kids: Sorry to hear of your mom's passing. She was a kind person and a
good friend to all. I especially remember all her help as church secretary at St. John UCC.
We are thinking of you all at this difficult time. Ruth & Larry Eggers, Spirit Lake, IA

I'm sorry to see your mother passed away.. I have fond memories of our Girl Scout days and belonging to Fortnightly Club . We had lots of fun and laughs.. My deepest sympathy to you all..

Nellie, so sorry t o hear about Donna. It has been along time. Betty Wyatt Lucas, Harlingen, Tx.

Peggy, Doug, David & Steve, We were saddened to learn of Donnas passing. We have wonderful memories from the days when the Gibbs family were our neighbors on 2nd Avenue in Melbourne. She and your dad were people who left an imprint on our lives. Our thoughts and prayers for you and your families during this sad time. Bill & Diane Barger, Missouri City, TX.

Dear Peggy, Doug, David, Steve, Angie, Abra, Karis, Stone, Carol, and Elliot--We are so sad. Your mom/sister has been a dependable staple of our lives for a long, long, time. We miss her. We also feel bad because we are unable to be there with you. My Dad was put in the nursing home a week ago Friday and is currently struggling. We send our love and our hope for strength to you.

Rest in peace Donna! Now you won't be in pain anymore! May God bless and keep you!

My remembrance of Donna was that she was always cheery and a wonderful addition to the Gibbs Family reunions. I know she will be missed by all her family. My condolences go to all of you. Betty Gibbs, Boulder, CO

The attached photos are added to the memorial of Donna Gibbs to help share their legacy.

Please help memorize Donna Gibbs by recording your attendance below.

Thank you for sharing your memory of Donna