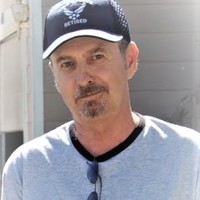 Thomas Michael "Mike" Collins, 70, of Enid, OK, passed away Wednesday, November 20, 2019, after a yearlong battle with ALS. Visitation will be 2:00 p.m. to 4:00 p.m., Sunday, November 24, 2019, at Brown-Cummings Funeral Home in Enid. Funeral service will be 2:00 p.m., Wednesday, November 27, 2019, at Peace United Church of Christ in Gladbrook. Interment will be at Crystal Township Cemetery in Garwin, IA. In lieu of flowers, memorials may be directed to the ALS Association in memory of Mike. Arrangements are entrusted to the Gladbrook Chapel of the Anderson Funeral Homes. Online condolences may be sent to www.andersonfhs.com.

Mike was born on July 21, 1949, to the late Roy and Mary Collins in Ponca City, OK. After high school, he joined the Air Force on November 18, 1968. He was stationed to military assignments in Germany, Japan, and numerous states. During this time, he met his future wife, Annette Marie Landt, and they later married on December 1, 1980. After 23 years of military service, Mike retired in 1991 and settled down in Enid. Even after his military retirement, Mike still wanted to devote time to the military. He did this by working an additional 20 years as a contractor at Vance Air Force Base. Mike loved to fish and hunt and enjoyed his time with his children and grandchildren. He also loved sports. If it was a Saturday, Mike was always watching the Huskers play. During the spring, he never missed a Cardinals baseball game on TV.

Mike is survived by his wife, Annette; six children: Tawnya and Jeff Jackson of Tulsa, OK, Kristi Collins of Tulsa, Wesley Michael Collins and Mike McGuire of Tulsa, Michael Collins of Enid, Ginette and Mike Rich of Orcutt, CA, and Stephanie and Tim Lukenbaugh of Grand Forks, ND. He is also survived by sisters Carol Andrasko and Debbie Boren; brother Charlie Collins; nine grandchildren; one great grandson; and many nieces and nephews. He was preceded in death by his parents, sisters Ann Kaurkane and Jeannie Keith; brothers: Steve Collins, Jerry Collins, and Paul Benton. He will be missed by all.

The attached photos are added to the memorial of Thomas Michael Collins 11/20/2019 to help share their legacy.

Thank you for sharing your memory of Thomas