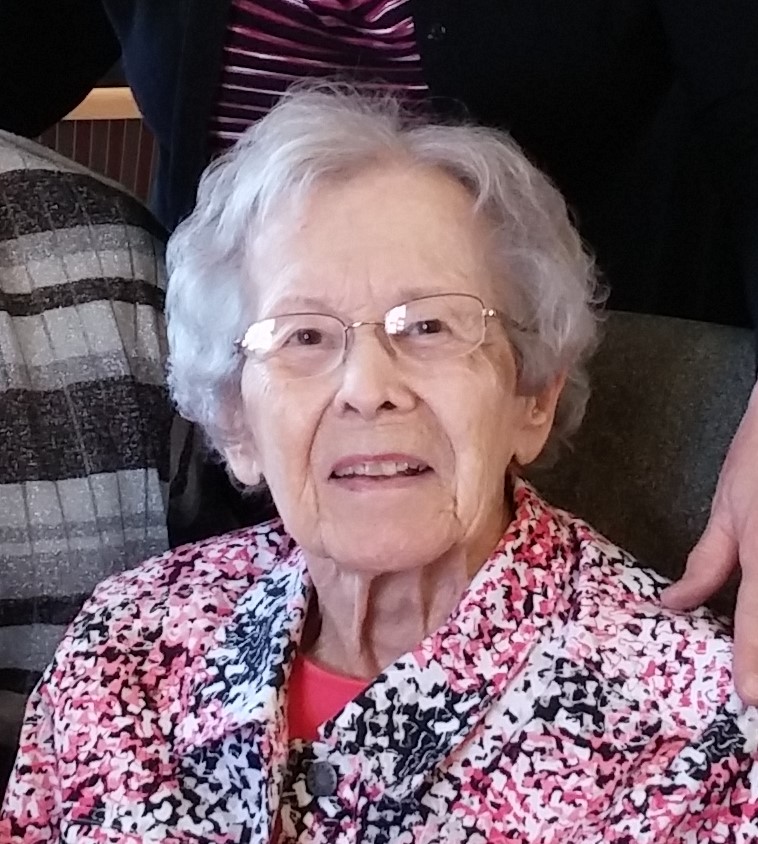 Jean Grossman Brennecke, born prematurely with a birth weight of only 4 lbs, was someone who adapted and overcame odds. She was born on January 20, 1919, to Raymond and Ruth (Cobb) Grossman. Jean was the eldest of four children, followed by Margaret Reading, Richard Grossman and Mimi Bidlack.

Jean was a lifelong resident of Marshalltown, graduating from MHS in 1937 and Marshalltown Community College two years later. She attended the University of Iowa, where she was a member of Delta Gamma sorority, before marrying Earl Brennecke in 1940. Jean dreamed of becoming a clothing designer -- she loved fashion, sewing and design. However, life took her in other directions. When World War II came, Jean, who was always practical, stepped in to run Earl's insurance business while he served in the Army.

After the War, Jean and Earl started their family. In 1949 when her father became a widower, Jean and Earl took him in and he lived with the family for 17 years. Jean lovingly cared for the needs of her father while also raising their three children. By the mid 1950s, Jean's sister (and best friend), Margaret Reading, and her family moved next door on Park Street.

Jean was a devoted, beloved mother and a dedicated homemaker. She nourished her family with homemade meals, which often included vegetables or fruits from Earl's farm. To know Jean was to know that dessert was a must. She always topped off a meal with a sweet treat, a trait that persisted up until the last weeks of life.

She was a grandmother of seven and great grandmother of eight children. The grandchildren loved visiting Jean and Earl at their Park Street home-- a place where grandkids could grow and explore, playing games, discovering new/old relics in the attic, playing dress up, learning family recipes, and, of course, taking excursions out to the farm.

Nearly everyone who knew Jean will remember her positive attitude. She had a way of finding a silver-lining in just about any difficulty. Even as she aged and dealt with increasing frailty, Jean not only tried to focus on "the bright side," she continued to make the effort to look her best. It was not just how you dressed, she emphasized, but the whole impression that you give others. In recent years, she said, "I smile because I know it's good for me and good for those around. It makes a difference." This sentiment carried Jean to the very end, as she would say: "If you're going to live almost forever, then you'd better smile and get on board."

Jean grew up as a member of the Congregational Church and was a member of the First Presbyterian Church in her later years. Jean had a wide group of women friends and was a 69 year member and past president of PEO chapter JU in Marshalltown. She also enjoyed being active in Glass Club, D.A.R, and her bridge club.

Jean was predeceased by Earl after 70 years of marriage, her three siblings and her eldest daughter, Ann Tulloch, who died just two weeks before her.

I will always remember your kindness and your beauty inside and out.

Jean was one special lady, you are blessed to have her as your mom. I’m sorry for your loss.

We knew Jean from our visits with our children where she lived via Church. We are better people for having known her and appreciate your family sharing her positive attitude with our family. May God in Heaven be with your family as you mourn and remember her.

Jean was a very special and kind lady and I always seen her with a smile. She was always dressed and looked as if she had a very important date or meeting to go to. She will be missed.

Tom & family, sorry for your looses of mother & sister-in-law. Thoughts & prayers are with you all, May the memories give you comfort.

A true lady. Always a kind word for everyone.

Mom’s best friend in life and I am sure they are enjoying being reunited in heaven. A wonderful person. RIP Jean.

The attached photos are added to the memorial of Jean Brennecke 01/02/2020 to help share their legacy.

Please help memorize Jean Brennecke 01/02/2020 by recording your attendance below.

Thank you for sharing your memory of Jean