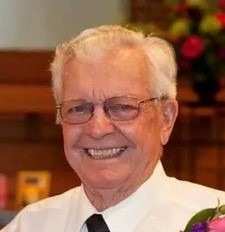 Horton was born June 2, 1926, one of 14 children, to Robert and Erene Staeffler. He served his country in the US Army during the Korean War, achieving the rank of Sergeant. Horton was united in marriage to the love of his life, Milda Nath, on July 28, 1957, in Rock Rapids, IA. They lived in Luverne, MN, until they moved to California in 1960. After retiring in California, Horton and Millie moved to Gladbrook. Horton was a milk man for Foremost Milk and a driver for Hamms Beer in Luverne, MN. After moving to California, Horton worked for Kimberly-Clark AW Factory and retired as a carpenter, specializing in installing custom doors and thresholds. Horton enjoyed working part time for the City of Gladbrook and also as a driver for Napa Auto.

Horton was active in the Elks, in Orange, CA, and the American Legion in Gladbrook, and enjoyed bartending at both. Some of his favorite pastimes were dancing with Millie, coaching Little League baseball, playing cards with family, horseshoes, and bowling. Horton "Who" enjoyed socializing and was known for his quick wit, great sense of humor, and big smile. Most of all, Horton was a wonderful and loving husband, dad, grandpa, great grandpa, brother, and uncle. Horton enjoyed life!

The family of Horton would like to thank Cedar Valley Hospice and Creekside Living and all their family and friends for their prayers, love, and support.

4 people have supported the family by purchasing them flowers or gifts from the Healing Registry.

Sending you our love and sympathy. We enjoyed Horton's big smile and kind spirit. Thinking of you all so much. Craig and Rose.

Sorry for your loss. Horton always had a smile and usually said hello with some "cute wit". He enjoyed life.

Sorry to hear of Uncle Horton passing. That smile will be missed.
Les &Sandy Nath

I spent many very good times with Uncle Horton and Aunt Milda in California. They were wonderful to everyone. Uncle Horton was always so much fun with a smile and kind words. What a wonderful Uncle!

Although I didn't get to spend a lot of time with Uncle Horton other than trips between MN and CA, whenever I think of him it's his big friendly smile that I first remember! I know you have so many great memories of a wonderful dad.

I have some very early memories of Uncle Horton. I remember him coming home from the service with a broken leg. I was being held by my dad when he got to Grandpa and Grandmas farm, I buried my head in Dad's neck because I thought a broken leg meant his leg was no longer on his body. Second memory is Uncle Horton always pushing Darlene and I on the big swings on our farm. He would push us really high and we of course were giggling hysterically that would cause the dog thinking he was hurting us to bark like crazy. Mom always thought the dog was going to bite him! Third memory was on our farm, Uncle Horton, Darlene, and I sitting on the basement steps watching Mom wash with the wringer washer. He would tickle our feet until we were nearly crying! All of these memories are probably before I was 5 or 6 years old, which would be nearly 70 years ago. I think he must have hung around at our farm a lot because Darlene and I were both pretty fond of him. He surely was a favorite to all the cousins!!!!

We absolutely enjoyed our trips to go see Uncle Horton! Going out to eat with him and Cindy was a great time. And the last time in October our visit was special We will truly miss him A very Special Uncle R.I.P. Uncle Horton. We’ll miss our visits❤️❤️❤️❤️❤️❤️

Deepest condolences to all. Uncle Horton was one of a kind. We will miss him.
Dale & Pat Kiebach. 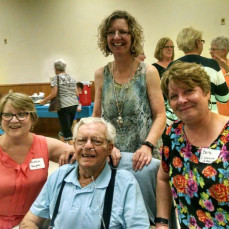 The attached photos are added to the memorial of Horton Staeffler 03/03/2020 to help share their legacy.

Please help memorize Horton Staeffler 03/03/2020 by recording your attendance below.

Thank you for sharing your memory of Horton