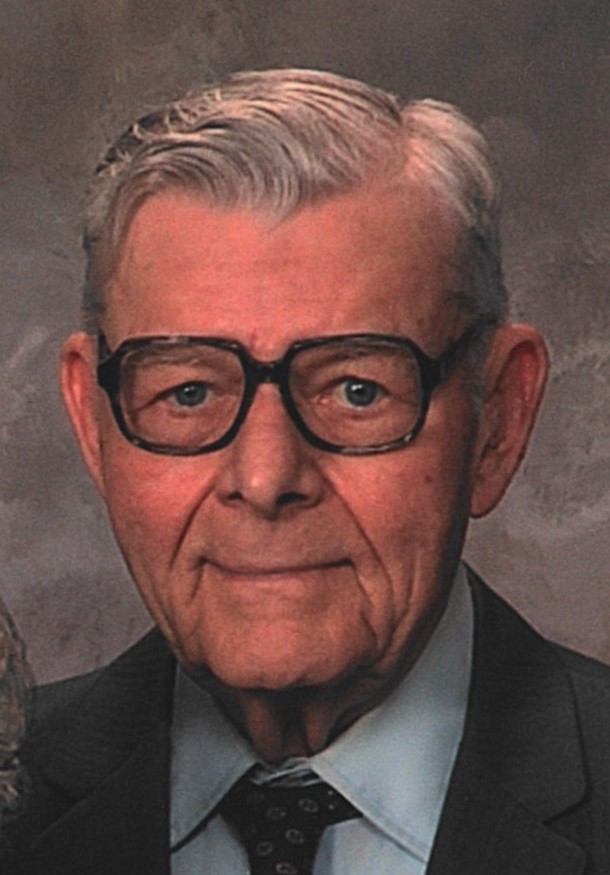 Anthony "Tony" was born November 4, 1918, in Haverhill, IA, to George and Elizabeth (Dankbar) Knoll. He proudly served his country in the Army Air Corps in World War II as First Sergeant from 1942 to 1945. Tony was united in marriage to Virginia Pfeiffer on June 15, 1948, in Marshalltown. He was owner and operator of a restaurant, Tony's Cafe, in Garner, IA, from the years approximately 1950 to 1955, at which time, he moved back to Marshalltown. He was then employed at Lennox Industries as a Quality Control Inspector and retired in 1984. Tony was a Roman Catholic, a member of the Society of St. Pius X, Philomena Chapel in Bremer, IA, a member of the Marshalltown American Legion for 60+ years, and a member of the Marshalltown VFW. He was honored to travel on an Honor Flight to Washington DC to see the World War II Memorial. Congressmen Rod Blum and Mark Smith recognized him on his 100th birthday with a United States flag and a State of Iowa flag. Tony and Virginia were recognized by Senator Chuck Grassley for their years of service as veterans, as well as for their 71 years of marriage. It is thought that Tony and Virginia were the longest living married WWII Veterans, being married over 71 years. Tony enjoyed gardening, taking road trips (many were religious pilgrimages), sightseeing, reading, and spending time with his family. He will be remembered for his avid love of coffee, sipping from his cup from the moment he awoke until he went to bed; also for his dedication to daily walks, and in his last years, to workouts in the recreation room at the Iowa Veterans Home.

Sorry for your loss Virginia. I remember when Tony would come into Hyvee and push a grocery cart around to get exercise. Sometimes Virginia and Tony would come in to Hyvee for lunch, and if I seen them, I would always take time to visit with them. I felt like this was important to them, and I enjoyed it also. Wow! 71 years of marriage! We are on our way with 66 years just celebrated. RIP Tony, and Virginia remember all the wonderful memories!

So sorry for your loss. I remember your Dad coming into Hyvee and pushing a shopping cart and walking around to get his exercise. Tony and Virginia would come in once n a while for a meal and If I saw them, I always took time to visit with them. Two of my favorite people. Goodness 71 years of marriage. We are on our way with 66 years. Rest In Peace Tony.

Sorry to hear about your dad's passing. Keeping your family in my prayers.

May care and love of those around you provide comfort and peace to get you through the days ahead. My most sincere condolences.

May care and love of those around you provide comfort and peace to get you through the days ahead. My most sincere condolences.

Pam, Pat and Tim. So sorry to hear of your dad’s passing! He lived a long fulfilling life but I am sure you still miss him. My thoughts and prayers are with you.

Tim and Virginia, so sorry to hear about Tony. I always think about you guys after moving to the vets home.

A person that departs from earth never truly leave, for they are still kept alive in our hearts and memories, through us, they live on. Please accept our condolences. May the Lord bless and comfort you and your family.

With deepest sympathy to Virginia and the family. Tony and Virginia were regulars at our Lennox retiree functions and we will miss their smiles and fellowship. Terry Frederickson

tony was a god fearing man, and a respected individual

The services for Anthony have not yet been added. Please sign up below to be notified when the services are ready.

The attached photos are added to the memorial of Anthony J. Knoll 03/21/2020 to help share their legacy.

Thank you for sharing your memory of Anthony