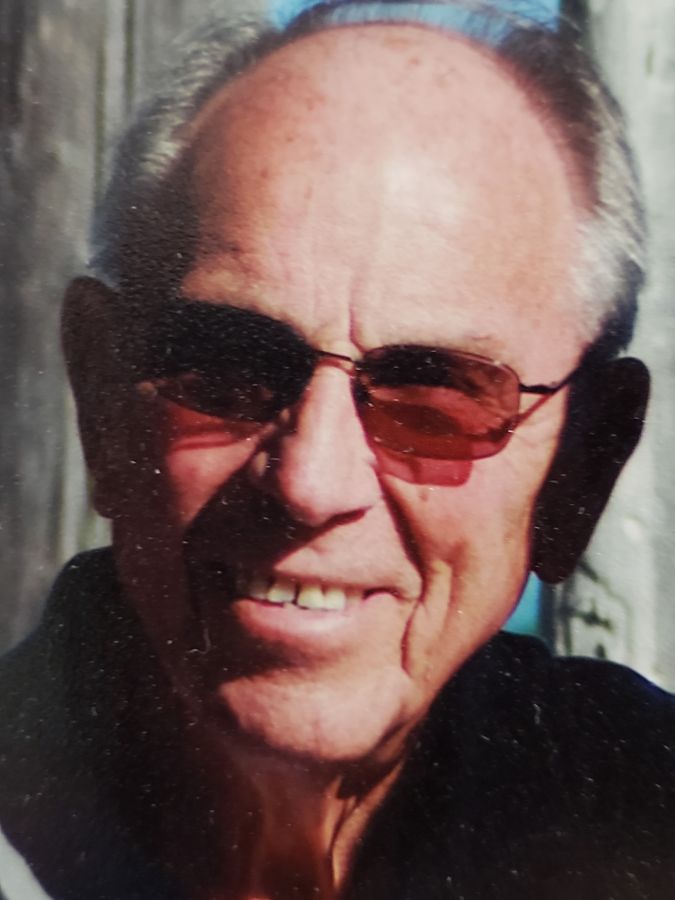 Lawrence E. "Larry" Myers, 94 of State Center, IA passed away Friday evening, May 29, 2020 at his home, surround by his loving family. Visitation will be 5:00 p.m. to 7:00 p.m., Friday, June 5, 2020 at Anderson Funeral Homes in Marshalltown. The family is requesting that those attending the visitation wear a mask and practice social distancing. A private Mass of Christian Burial will be held. Interment will follow at Calvary Cemetery in Creston, IA In lieu of flowers memorials may be directed to St. Joseph Catholic Church in State Center. Online condolences may be sent to www.andersonfhs.com


Larry was born on January 18th, 1926 to John and Bertha (Eberle) Myers in Marysville, MO. He joined the Navy in 1943 and spent just under 3 years on the USS De Grasse and running troop transports during World War II. After the war, he returned to SW Iowa and was united in marriage to Regina McCann on January 2, 1950. In there 55 years together, they had 7 children. Larry, along with being in the war, worked for years as a carpet layer, drapery specialist and an interior consultant, along with being a wonderful father & tremendous role model. Later in life, Larry was a supporter of West Marshall sports, spent years volunteering for St. Josephs Church in State Center, Meals on Wheels as well as may other organizations. Larry followed his children & grand children's sporting events, enjoyed traveling and of course the Iowa Hawkeyes and St. Louis Cardinals. Larry was always very handy and if anyone needed assistance with anything, he was always willing to step in to help. He took pride in his woodworking ability and later, his painting.

Larry lived 2 houses down from me in State Center, 11 years ago i found out he was the person selling the house i live in now for the couole sister from out of state. He was a great guy, i will cherish are talks, I remember the first time he ever cussed in front of me, he grabbed his moulth with shame, (as if I'd never heard that before) I told him I used to be a carpenter and he says with a chuckle, "Oh I bet you've heard a lot worse! I used to snowblow his driveway when it wasn't done, I told him I wouldn't except payment. He asks me, "do you drink whiskey?" He brought me a bottle that summer. He was a genuine guy with a huge heart! He will be missed! RIP Larry

Our hearts break with yours. Your Parents were incredible and you all are their legacy, a wonderful family! What fond memories I have of them being such dear friends and support for my parents and family for so many years. Sending our love and prayer for all of you during this difficult time. Jackie (Rohrer) Larsen

Karen, Mary, Ed, John, Mark, Al your dad was a genuine good guy. Larry was one of those people that never knew a stranger. He was always ready and willing to lend a hand. I would think of him from time to time, wonder how he was doing and think about getting up to State Center to visit him now that I’ve retired. I regret not making that trip. My condolences.

Larry was the best. What a great friend and dear to my family for 60 years.
He taught me carpet installing and was by far the best at that trade of anyone I ever knew.
His smiling happy way will be forever missed.
I hope they're all having a big party up there now.
My condolences to his great family.
Sam Douds

We lived just to the west of Larry in State Center for a little over three years, Ironic enough we now live next to his nephew Dan McCann, small world.I enjoyed our conversations very much. Not many days went by we didn't stand out in our driveway and talk. He would bring me in to see his wooden cars and other toys he made for grandchildren as well as his paintings. What a great guy he was and he will be missed. My prayers go out to his family, RIP Larry.

Uncle Larry is the last of all my uncles and aunts on the McCann side, and at one time there were a lot of them. Dad was one of ten. I always found Larry and Regina to be such special, down to earth, kind people. I have lots of fawn memories of the big family reunions we use to have so many years ago. Not sure my kids are even old enough to remember those and they are now in their 30’s. How quickly the years pass. Larry, may you rest in peace and please give my love to Regina and Dad.

To Mary and all the rest of the kids, my thoughts and prays are with you at this time.

Larry has been my customer here at Partner Communications for many years. I loved when he stopped in to chat. He told me all about his woodworking. It sounds like he was a fantastic carpenter! I use to live about 3 doors away from him on 2nd St NW. We would always talk about the "project". Had lots of laughs. I also think so much of his daughter, Mary. She is a great lady and her dad was definitely a superb role model. Larry, I'm sure going to miss seeing your smiling face walking in my door. RIP friend.

I am so very sad to hear of Leonard's passing. " Uncle" Leonard and " Aunt" Regina and family have had a very special place in my heart since I was a little girl. Regina was my moms best friend and I loved to hear the stories about their good times! I just know that they are all up there together having a great time! Peace and love to all of you and I will leave you with this message as it helps me at times. " And when it rains on your parade, look up rather than down. Without the rain, there would be no rainbow" Love you all , the other little neighbor girl next door Jan.

I will never forget this dear old friend Leonard! He was with me as a little girl and comforted me through out my whole life. He loved everyone and always lended a helping hand to anyone who would ask. His loving family he created with Regina was the best gift he has given to this world! My heart is weeping for this precious family and know that heaven is not far from us here on earth! And yes Leonard those damn MASHED POTATO'S will be waiting for me when we meet again! Love and hugs to this awesome family xxoo from your little neighbor girl next door Joni

The attached photos are added to the memorial of Lawrence "Larry" Myers 05/29/2020 to help share their legacy.

Thank you for sharing your memory of Lawrence "Larry"