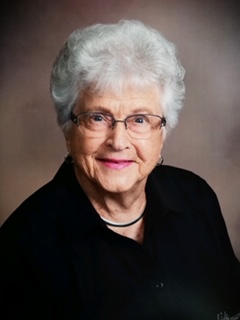 Shirley L. Bowman, 95, passed away on Thursday, July 23, 2020 at Grandview Heights in Marshalltown, Iowa of congestive heart failure with complications from COVID-19. Private Mass of Christian Burial will be held. Anderson Funeral Homes of Marshalltown have been entrusted with these arrangements. Online condolences may be sent to www.andersonfhs.com. Mass of Christian Burial will be live-streamed on Anderson Funeral Homes Facebook page at 10:00 a.m., Monday, July 27, 2020.

Shirley was the daughter of Louis A. and Beatrice (Connor) Schlicht. She was born October 27th, 1924 in Marshalltown and attended Marshalltown Schools graduating in 1942 where she was voted as the most athletic female student in her class. She also attended State Teacher's College known now as the University of Northern Iowa.

On March 23, 1946 she was united in marriage to Robert H. Bowman in Marshalltown. They moved to Santa Monica, CA where Bob went to school and Shirley worked for the Santa Monica Outlook Newspaper in the classified advertising department. Returning to Marshalltown, she was employed by the Times Republican prior to starting a family.

As a stay at home mother, Shirley volunteered many hours in the community. She served on the boards of the Emergency Food Box, YWCA, Hospital Auxiliary, Archdiocesan Council of Catholic Women, the Deanery Council, St. Henry's Council and Parish Council of Catholic Women. She was a member of St. Francis Parish and St. Henry's PTA, St. Patrick's Study Club, Starpha Club, P.E.O., Chapter JU, Elks Ladies, and the Wednesday Bridge Club. She was proud to be a 60+ year member of the Daughters of the American Revolution and Beta Sigma Phi sorority.

Shirley and Bob spent many years traveling especially to Wyoming for hunting and fishing trips as well as visits to their cabin near Douglas WY. Throughout her life, Shirley enjoyed knitting and in the late 1980's she and her sister opened the "Yarn Barn" to encourage others to join their craft. Every year she would give a hand-crafted Christmas ornament to each family member. She enjoyed spending time with family and friends playing golf, tennis, cards, and hosting many gatherings at her home. Shirley had been an active participant in the lives of her children, grandchildren and great-grandchildren and she was known affectionately by "Mamo" to all.

Shirley was preceded in death by her parents, husband, Bob; one sister, Betty Melcher; brothers-in-laws Jack Bowman and Dave Melcher.

The family would like to thank the staff at Grandview Heights for the loving care given to Shirley.

Our deepest condolences to the entire Bowman family for the loss of Shirley. My mother always spoke so fondly of Shirley and Bob and was grateful to have her as a “cousin”. She was a very gracious person and aa delight to be around. God rest her soul.

To the Bowman families, Shirley was a great friend to many of us. We will always cherish the family times that we shared with all of you. Everyone in the Adland / Bakken families send their condolences.

Shirley was such a sweet, sweet lady. We always enjoyed visiting with her. Jim and family you have our deepest sympathy. God bless you all.

Jim and all... God bless you all with comfort, strength, peace and a measure of heaven-joy.

JIM and family: Sorry to hear of Shirley passing. My mother spoke fondly of her,as well as Bob. I will send a memorial to St.Francis. Peace to you all.

My sympathy to your families. Shirley was an elegant lady and always friendly to me. Years ago she and Bob hired me to occasionally babysit - if I wasn’t already taking care of the neighbor girls, Judy and Janice Erb. Good memories. So sorry.

Jim and Patty, I am so sad to read of your mother's passing. She seemed like such a sweet lady. My sympathies to you and your family. Julie Miller

I had the pleasure of meeting Shirley at Grandview. She would visit Bob while I visited my Mom. We shared some stories with each other. Shirley was a great person, I always enjoyed our visits. Im sorry to hear of her passing. My condolences to the family.

Jim, Cindy and family
We are sorry to learn of your loss. She and you are in my thoughts and prayers
David Thomas

So sorry for your loss. Your mom was a very funny sweet lady. Meet her after the tornado at Willows when I visited my mom Bev Nusbaum. We would all eat dinner together and laugh. Prayers to you and your family.

Jim & family, My thoughts & prayers are with you during this difficult time. Take care to all of the family. Debby Tomlinson

I'm so very sorry to learn of Shirley's passing. She was a beautiful, fun- loving, caring mother and life-long friend to so many, including my aunt and mother. She will be missed. My sympathy to her children and family.

Shirley was a super nice lady. We used to go on vacation out West with Shirley and Bob. Bob and my dad owned the Space Van Company, an aluminum car top carrier. 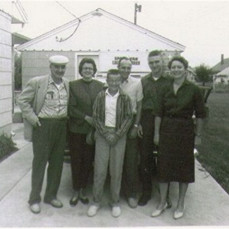 The services for Shirley have not yet been added. Please sign up below to be notified when the services are ready.

The attached photos are added to the memorial of Shirley L. Bowman 7/23/2020 to help share their legacy.

Thank you for sharing your memory of Shirley