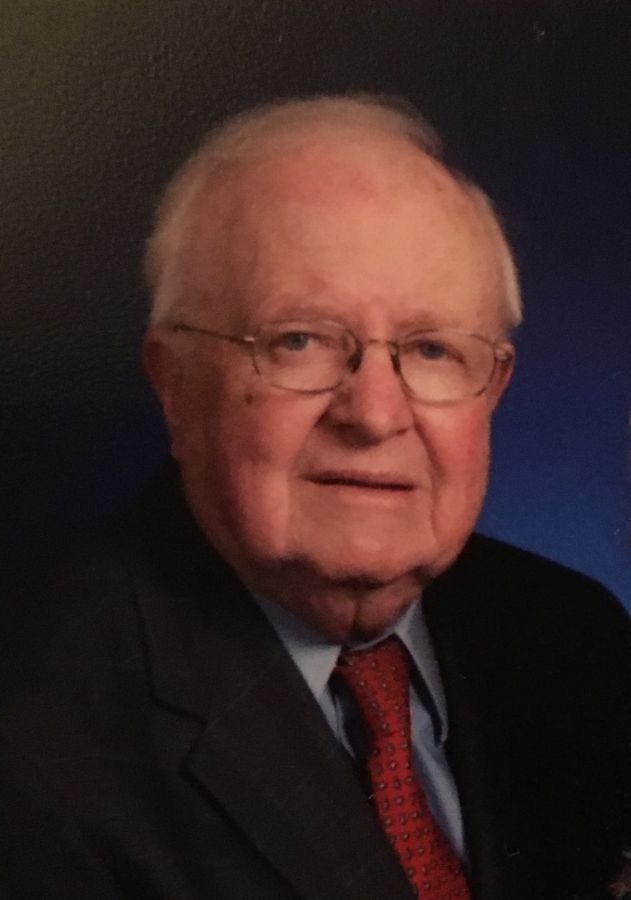 Lee Brintnall was born at St. Thomas Hospital on May 22, 1928, to Ken and Ruth Brintnall. He attended Franklin Elementary, Central Jr. High, and graduated from Marshalltown High School in 1946. Lee attended Grinnell College for two years, then transferred to Washington University (St. Louis). Following graduation, he served our country in the Army for two years during the Korean war. While at Grinnell College, he met Valois Ann Jensen. They married in Graettinger, IA, on November 30, 1952. They are the parents of David J., Barbara A, and Grant C. Brintnall. At 14, Lee started working at Brintnall's Department Store and continued through high school. Younkers purchased Brintnall's store in 1948. Lee managed the Younkers Department Store in downtown Des Moines and Marshalltown until 1966. He worked and as a Manager/Buyer for Grahams Department store in Ottumwa from 1966 to 1970. Lee and his family moved back to Marshalltown in 1970, where he began a banking career with Commercial State Bank. Lee retired in 1986 from what is now U.S. Bank. During his banking years, he earned a master's degree from the Graduate School of Banking at the University of Wisconsin. Lee's interests include railroading, circus' fire engines, and most of all, cruising the world 's oceans and seas with Valois. He was active in community work, serving as past president of Junior Achievement, Marshalltown Rotary Club, and the MCC Foundation. He served on the Community Concert Association and Chamber of Commerce board of directors, served as a Water Works trustee and YWCA trustee, and the "Y" Heritage Club. He was a past treasurer of the Animal Rescue League and was a deacon at First Congregational Church. In later years, he volunteered his time at the Marshalltown Public Library and loved the years he read stories to kindergarteners at St. Francis school. Lee was a good man and a great provider to his family. As a lifelong Republican and now deceased, Lee figures his next vote will be Democrat.

Lee is survived by his wife of 68 years, Valois, Daughter Barb (Barry) Hohlfelder and her sons Justin, Brett, and Will and son Grant (Connie Hodges) and his children Sam, David D., and Olivia. Preceding him in death were his parents, brother Richard J. and son David J.

3 people have supported the family by purchasing them flowers or gifts from the Healing Registry.

When we moved to Marshalltown in 1958 to begin our dental practice in the Masonic Temple I needed some draperies for two large south windows so I went to Brintnall/Younker dry good store on Main Street. The manager, Lee, met me and asked how he could help me as well as asking my name. He took me down to the drapery department but with his inquisitiveness for community affairs he wanted more particulars so I obliged. He "took my family under his wing" so to speak to help us become acquainted with the community and in the community. He was our personal Chamber of Commerce. We became good friends which lasted 60+years in spite of the fact that I hired one of the clerks, Flaudia Bailey, in the drapery department to be my dental assistant. If you needed to know what was going on in Marshalltown Lee was the one who knew. HIs welcoming manner at the library is missed. He was a good person and a good friend. Bob Peterson

Lee hired me for my first banking job. He always had a twinkle in his eye. He was a wonderful advocate for Marshalltown. I remember how he typed with just two fingers - bet he could have put any secretary to shame! On Rotary day, he waited for Bill Tank to walk down to the Tallcorn. He and Valois welcomed our family to his home one night after a Community Theatre production when we couldn't get home because of a heavy snow. And when they moved to the house on Gethmann, they welcomed Ron and me several times for cocktails. He was a wonderful host - and served a very cold beer! Anyone who knew Lee will miss him, as I do, deeply.

Family
I first knew Lee through Rotary orientation. I always enjoyed seeing him. He and you are in my thoughts and prayers

Lee was a beloved Library Volunteer for over 25 years. He is sorely missed at the Library. Our deepest sympathies to Valois and his family. Sarah Rosenblum, Marshalltown Public Library Director.

Valois and family,
Please accept our sincere condolences for the loss of Lee. Our community has lost a fine man. Marshalltown Community College, the Marshalltown Library, Rotary, and many other community entities will benefit for a long time because of Lee's contributions. Our thoughts are with you.
Bob and Linda Moore
MCC/Rotary/Central Iowa Art Association

The attached photos are added to the memorial of Lee Brintnall 01/07/2021 to help share their legacy.

Please help memorize Lee Brintnall 01/07/2021 by recording your attendance below.

Thank you for sharing your memory of Lee