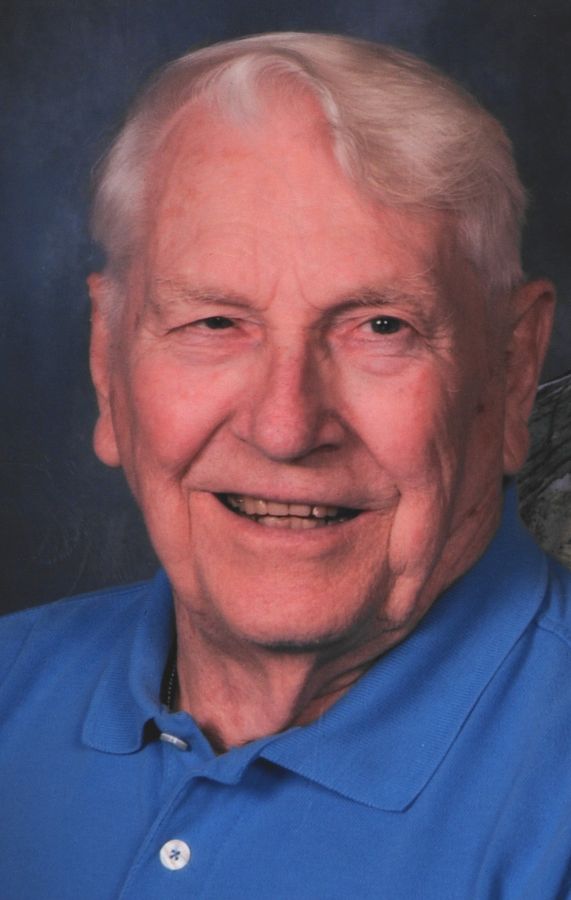 Allan L. Eddy, 88, of Le Grand, IA, passed away January 24, 2021 at Grandview Heights Rehab and Healthcare in Marshalltown, IA. Graveside services will be 11:15 a.m., Friday, January 29, 2021 at the Oak Hill Cemetery in rural McCallsburg, IA. Visitation will be 9:30 a.m. to 10:30 a.m., Friday, January 29, 2021 with a 10:15 a.m. Masonic Service at Anderson Funeral Homes in Marshalltown, IA. Per state guidelines, social distancing and masks will be required. Anderson Funeral Online condolences may be sent to www.andersonfhs.com. A celebration of Allan's life will be held in the summer. Memorials may be designated to Hope United Methodist Church or Iowa Natural Heritage Foundation.

Allan was born September 24, 1932 in rural Rhodes, IA to his parents Harry and Bertha (Scott) Eddy. He graduated from Rhodes Consolidated High School in 1950. Allan later joined the Air Force in 1952 where he served during the Korean War. He was united in marriage to Carol Erickson on June 30, 1968 in Dayton, IA. Allan worked at Lennox for many years as a special fitting designer. Later Allan was employed with the United States Post Office where he was a postal clerk for 25 ½ years retiring in 2000. Allan was a member of the Hope United Methodist Church, the American Legion, and the Masonic Lodge. He served as Masters of three different lodges: Eden Lodge in Rhodes, Polar Star Lodge in LeGrand, and Marshall Lodge in Marshalltown. Allan was the Vice President of the Eddy Family Association in America, a member of the Marshall County Historical Society and served on the Rhodes City Council.

He was a man of many interests including coin collecting, creating stained glass pieces, rebuilding Corvettes, raising Siamese cats, refinishing furniture, doing 1000 piece puzzles, and reading. Allan served as treasurer of the Central Iowa Coin Club for many years. He was instrumental in creating the coin designed to represent the club. Allan and Carol traveled to all 50 states and many of the Canadian provinces. Some of his best times were driving to Arizona and Texas to see his sons and their families. He loved family get-togethers and loved to play board games with friends.

Allan loved to tell how they drove the Vette to the northern and southern borders of the USA, and to the east coast. He brought three babies home from the hospital in the Vette. As a member of the Central Iowa Corvette Club, he was third in the nation in points one year. You could often catch Allan driving his Corvette around town.

He loved being an Eddy. He and Carol attended many Eddy reunions in Middleboro, MA. While traveling, he would try to meet Eddys along the way.

Allan is survived by his wife Carol Eddy of LeGrand, three sons, Scot (Domino) Eddy and Zandra, of Austin, TX, Matthew (Ricki) Eddy, and Nathaniel and Quentin, of Killeen, TX, Benjamin (Lizbeth) Eddy, and Daniela, Piero, Antonella, Azure and Alayna of Surprise, AZ, a sister, Leola (Larry) Wright, a brother -in -law and a sister-in-law, Paul (Nora) Erickson, and Darlene Erickson, many nieces, nephews, and cousins.

He is proceeded in death by his parents; two brothers, Glenn, Leonard and two sisters, Patricia Menter and Mavis Brown.

The family wishes to express their gratitude to Dr. Lasack, the Willows, Grandview Heights, and Unity Point Hospital for their compassionate care of Allan.

ALLAN'S SMILE AND WITTY SAYINGS LIFTED YOUR SPIRITS. HE WIKK BE MISSED BY MANY. THOUGHTS AND PRAYERS FOR HIS FAMILY. JOAN FISHER

Carol, I just read this. Please know that you and your family have my deepest sympathy. Alan was a wonderful person and our lives are better because he was a part of our lives. -Mark Smith

Tom and I have such wonderful and fun memories of going to movies and out to eat for pizza or after a movie for dessert or playing games at your house... He always had us laughing with that sparkle he would get in his eye . He was a good and kind and gentlemanly and intelligent and knowledgeable and afun guy with a delightful sense of humor. And you, Carol, and he made a good team.

Carol and family. At this very difficult time know you are in our thoughts and prayers. Allan leaves us with great memories. He was a great conversationalist about many subjects and he never seemed to talk about things he had already shared. He is missed as a Brother Mason and fellow Corvette enthusiast. We all will miss his smile and cheerful attitude. Rest In Peace my Brother.🙏 Marlene & Roger Bauder

To the Eddy Family. I have very fond memories from my childhood staying over at your home. Alan was always such a kind person to me as a kid. One of the things that I enjoyed looking at whenever I had come to your home was the beautiful stained glass that Alan had created. He was such a talented person. Thinking of all of you during this difficult time.

Carol and family, we were so very sorry to here of Alan’s passing. Our hugs and prayers sent to all of you .Alan was alway interesting to visit with all his stories and humor. Blessings to you and you family🙏Don and Sue Hamiel

I am very sorry to hear that Allan has passed. I have looked you guys up now & again, because you were such a huge part of our lives just a handful of decades ago. My prayers of peace & finding comfort through this time. ~~Jodie Hoover-Jasper

Carol and boys. I am so sorry for your loss. It was my privilege to know Allan
David Thomas

I am so sorry Carol & family. I have missed his stories & sense of humor since he has been in the nursing home. We had good times at coffee. He will be missed by all of us whose lives he touched.

Dear Carol and family, I am so sorry for your loss. Allen was such a good man. He had a wonderful sense of humor and quick wit. I thoroughly enjoyed visiting with him at coffee. What good times we had at the Sunrise Cafe. May God give you comfort. Sandy Mohr

As a dental assistant for Dr David Blaha I got to know Allan. He had an awesome yellow Corvette and a pocket full of silver dollars. A love of life and a wonderful smile were a part of Allan. It is my honor to have known him.

The attached photos are added to the memorial of Allan Eddy 01/24/2021 to help share their legacy.

Please help memorize Allan Eddy 01/24/2021 by recording your attendance below.

Thank you for sharing your memory of Allan