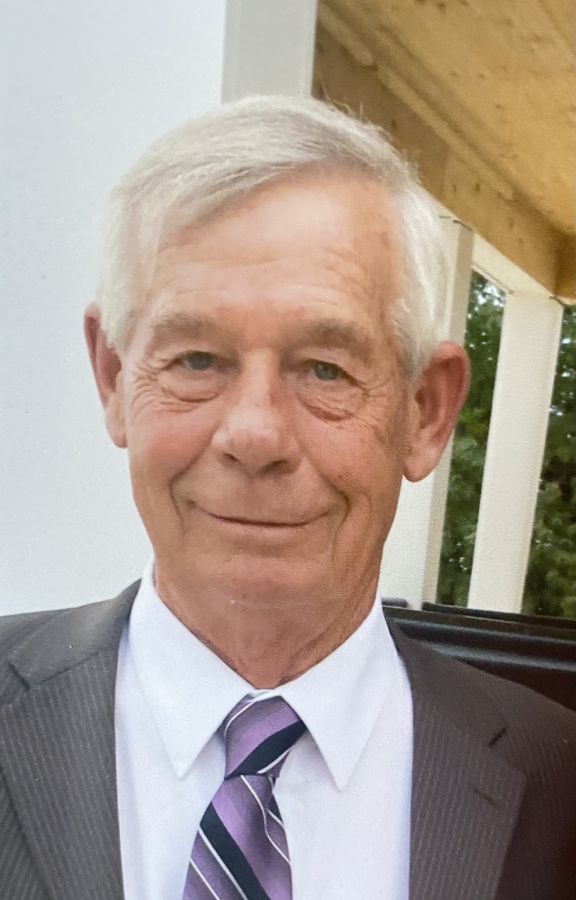 Dean C. Sharp, 77 of Conrad, IA passed away peacefully Friday, February 19, 2021 at his residence. Funeral services will be 10:30 a.m., Monday, February 22, 2021 at the Conrad United Methodist Church. Visitation will be 3:00 p.m. to 5:00 p.m., Sunday, February 21, 2021 at the Conrad United Methodist Church. In lieu of flowers, memorials may be directed to Tee Up To Beat Cancer, P.O. Box 156, Conrad, IA, 50621. Anderson Funeral Homes of Conrad has been entrusted with arrangements. Online condolences may be sent to www.andersonfhs.com


Dean was born September 24, 1943 to Charles and Rosaline (Haynes) Sharp in Marshalltown, IA. He graduated from Beaman-Conrad High School in 1961. Dean was united in marriage to LaDonna Schiebel on November 23, 1963 in Conrad and was a member of the Conrad United Methodist Church. He was a former member of the Conrad Volunteer Fire Department and the Conrad Cemetery Board. He engaged in farming his entire life and was happy to have his son and grandson follow in his footsteps. Dean was proud to participate in Tractorcade in 1979, where he flew to Washington D.C. to lobby for increased crop prices. He enjoyed spending time with his family and friends, especially his many "safety meetings" at the shop.

And please remember, as Dean always said, "Have a little fun every day!"

7 people have supported the family by purchasing them flowers or gifts from the Healing Registry.

We are so sorry to learn of Dean's passing. Your family will be in our prayers, and please let us know if there is anything we can do to help.

Thinking of the entire Sharp family in their time of mourning. I have wonderful memories of Auntie Cheech and Uncle Dean - the week we spent in the Osarks was one of the best. With love The Berry Family - Amy (Jordan) Ryan, Masen & Jocelyn.

Heartfelt condolences from Vern and me! We wish we could be there in person today, but want you to know that you are in our thoughts and prayers! I have so many memories of holidays and summers at the farm. Uncle Dean, I will miss your crazy sense of humor most!
Shelli Jozwiak

Dear LaDonna and family,
We are so sorry for your loss. Blessings and peace be with you. Steve and Sandy Simms

So many fond memories of Dean and your whole family. There were crazy times at the lake, with you kids jumping off the roof of the dock. The adventures at Osceola. Worked hard played hard. I'm thinking of you all, with love . Hang on to your memories. Bev Miller

LaDonna and family,
It has been many years since I last spoke with Dean, but the memories of our high school time together are still very special to me. He was truly a guy that put his whole heart into the tasks and situations he found himself in. His word could always be counted on as sure and golden. Your family has inherited a special legacy from him that is very special. Blessings to you and yours at this difficult time in life.

My thoughts are with The Whole Sharp gang. Rest in peace my friend ❤
Love, Brian Casebolt

My condolences to the Sharp family. I'm happy to have had the honor to meet Dean. Such a nice and genuine guy. Rest in Peace Dean Sharp. You will be missed greatly!

Such a kind, loving, generous person❤️

I have known Dean since we started kindergarten together and graduated in 1961. WhenI I got word of his passing many fond memories of growing up together came roaring back. Things we did that I hadn't thought about for some time and their return brought joy to my heart. My condolences and sympathy go out to his family and all who's life he touched. Dean will be missed as he was truly "one of the good guys!"

Thinking of you all at this time and prayers for peace and comfort.
Laine and Kristy Rittgers

Our thoughts and prayers are with the Sharp family.

Tears are flowing as we read this! Our hearts ache with all of yours! Wonderful man and best friends to Betty & Bob! Our deepest condolences along with our thoughts and prayers to all of you! Iam sure Betty & Bob are welcoming him to his heavenly home! 🙏🏻❤️

Prayers for the family!

We are heart broken at the loss of Dean. We will keep the entire Sharp family in our prayers. 🙏🏻💙

Dear Sharp Family,
We are so sorry for your loss. Dean always seemed to have a good time, whether at work or at play. Always a smile on his face. Our thoughts and prayers are with all of you during this very sad time.

So sorry for your family's loss, Dean's shenanigan's will keep everyone's memories of Dean alive. He will be missed but not forgotten. Love to all

I will miss his deep friendly voice, always a gentleman. Such a sweet man. God sure took a good man away from us, guess he needed him more..so sad, prayers for the Sharp family.

The attached photos are added to the memorial of Dean C. Sharp 02/19/2021 to help share their legacy.

Thank you for sharing your memory of Dean