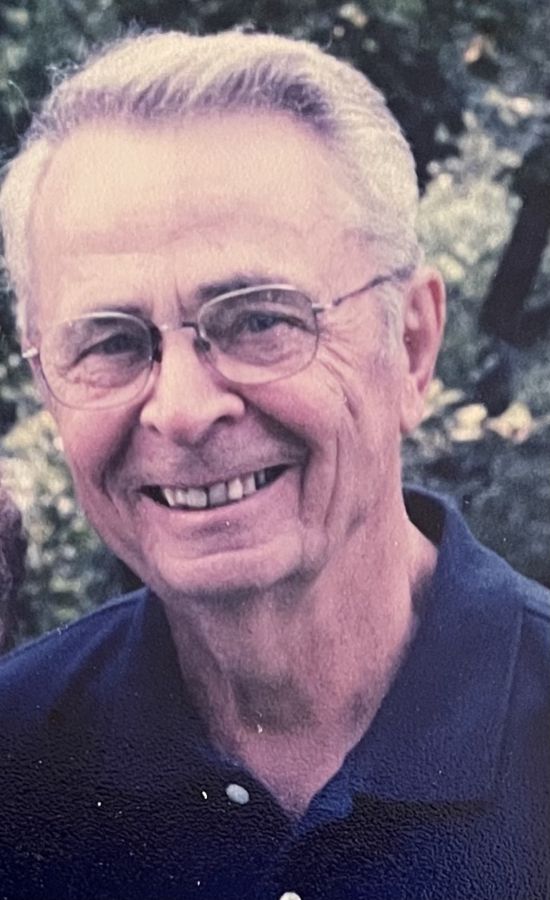 Paul S. Eckerman, 90 of Conrad, IA passed away Monday, May 3, 2021 at the Oakview Nursing Home in Conrad. Mass of Christian Burial will be 10:30 a.m., Friday, May 7, 2021, at St. Francis of Assisi Parrish - St. Henry Catholic Church in Marshalltown. Visitation will be 5:00 - 7:00 p.m., Thursday, May 6, 2021 with a Vigil Service taking place at 7:00 p.m. at the Conrad Chapel of the Anderson Funeral Homes. Interment will take place at the Conrad Cemetery with military honors following the service and luncheon. Online condolences may be sent to www.andersonfhs.com

Paul was born on November 28, 1930 to Sylvester and Mamie (Taylor) Eckerman and grew up in Early, Iowa. Paul graduated in 1948 and enlisted in the Navy in June of 1951. Paul married the love of his life, Helen Landgraf, on October 3, 1953. After serving for four years in the Navy, Paul completed college at Buena Vista in Storm Lake, and began his teaching and coaching career.

Paul taught and coached in Meriden and Schaller, Iowa before coming to Union-Whitten. One of his greatest accomplishments was coaching the U-W Cobras to the 1968 State Girls Basketball Championship with an overtime victory. In 2007, Paul was inducted into the Iowa Basketball Coaches Hall of Fame.

After several years at Union-Whitten, Paul received his administrative degree and became an elementary principal at BCLUW. He continued coaching high school girl's basketball through the 1979 season. Paul retired from the school in 1993.

Paul was a lifelong fan of the Notre Dame Fighting Irish and all things chocolate. Within his community, Paul was a member of St. Mary's Catholic Church and the Conrad American Legion. In retirement, he enjoyed golfing, playing cards with friends, and spending time with his family.

Aunt Helen, Rick, Paula and Mark,
So sad to hear about Uncle Paul! Not only was he my Uncle but also my Godfather😊. I am so glad I got to see him the summer before Covid hit. I always loved hearing him and my Dad and the other uncles talk about their wild younger days! Wish I could be there for his service but know my thoughts and prayers are with you all today.
Marilyn Eckerman Dawes

Mr Eckerman will be missed for certain, but I’ll have memories of him for my lifetime. I was fortunate to have spent my summers as a boy playing golf with him and my father. Enjoyed hearing glory day stories of his basketball days. So neat that he was elected to the Iowa Hall of Fame. Loved his smile, laugh, and calm demeanor. Taught his students how to lead with a gentle touch. Peace to Helen and family.

Paul was a special person--funny, creative, and a joy to be around. I will never forget when he coached the Union-Whitten girls to the State Basketball Championship, and how proud I was to say he was my uncle. Helen, Rick, Mark, and Paula: please accept my sincere condolences.

Growing up in elementary, he always asked, “How are my Washington Street girls?” He just let you know he cared about you. May God comfort you all now and let your memories with him provide you peace.

This is a sad day for all whose life is changed because they were lucky enough to have known Mr. Paul Eckerman. Many moments make me smile when I think of Mr. Eckerman, but I think the thing I will remember the most is his infectious laugh. When he laughed, everyone laughed. We will all miss that laugh.

As a young first grader, I was diagnosed with Type 1 diabetes. Mr. Eckerman always checked on me, even if I didn't require orange juice in the nurse's office. He cared for me with gentleness and kindness, and for that, I am forever grateful. May God's hand of peace and compassion reach the hearts of all Mr. Eckerman's family now and in the future.

Our deepest condolences to the Helen and all the family. Paul was a true treasure for our school district and a true educator and will be greatly missed by the community. Our prayers and sympathies are with all of you. Shane and Cathy Tiernan

I was so sorry to hear of Mr Eckerman’s passing. I am very glad I was able to have some visits with him after Mom moved to Conrad too. Of course, we talked about basketball and life in general.
Sue Morgart Aasen

So sorry to hear of Paul's passing. My prays are with you.

So, so sorry to learn of Paul's passing. Dan really enjoyed having him as principal when he started his teaching career. Later, I got to know him better while working with the St. Mary funeral lunch group. My sincere sympathy to Helen, Rick, Mark, Paula, and the rest of Paul's family. May years of memories of the happy times help you through these dark days.

Helen, Rick, Mark, Paula and families,
Such fond memories of Paul. And memories of the Eckermans, Hausers, and Cliftons playing cards while we kids played together. And a very poignant, fairly recent memory of watching a film clip of Paul coaching U-W vs Everly in what is called "the greatest girls basketball game of all time" with tears flowing down my face at the Naismith National Basketball Hall of Fame in Springfield, MA, a few years ago.
Love to you all,
Chris and Karen Clifton

So sorry to hear... May all the warm memories in your heart wrap around you now and give you comfort and peace... GOD'S BLESSINGS
Bev & Jerry Gade

Helen, Rick, Mark, Paula and families,
I have so many fond memories of Paul. And memories of the Eckermans, Hausers and Cliftons playing cards while we kids played together. And a very poignant memory that's fairly recent... watching a clip of Paul coaching U-W vs Everly in what's called "the greatest girls basketball game of all time" with tears flowing down my face at the Naismith National Basketball Hall of Fame in Springfield, MA, a few years ago.
Love to you all.
Chris & Karen Clifton

The attached photos are added to the memorial of Paul S. Eckerman 05/03/2021 to help share their legacy.

Thank you for sharing your memory of Paul