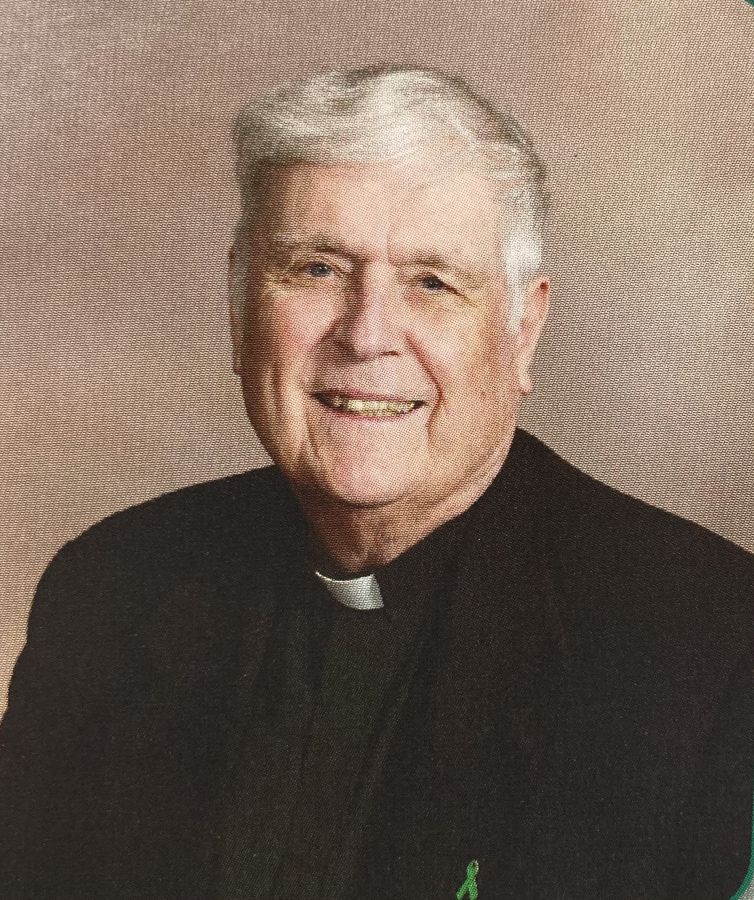 Father Tom was born and grew up in Des Moines, IA. His family moved to Marshalltown where Father Tom began school at St. Mary in Marshalltown. He graduated from St. Mary High School in 1951, attended Loras College in Dubuque, graduating in 1955, and then Mount St. Bernard Seminary in Dubuque. He was ordained a priest January 31, 1959 at St. Raphael Cathedral in Dubuque. He worked as an assistant golf professional for five years at the Wakonda Club in Des Moines prior to his ordination to the priesthood.

Father Tom worked for several years in the Marriage Enrichment Program and began the Alienated Catholics Anonymous Program in Marshalltown helping many people return to the Church. His hobbies
included golfing and calligraphy. Father Tom enjoyed being with family, joining parishioners for meals, and being with his priest friends, especially his Jesu Caritas prayer group. He enjoyed going on golfing trips with his priest friends to Minnesota, Nebraska, Wisconsin, Illinois, Colorado, Mississippi, Texas, Missouri, California, Arizona, Florida, Mexico, Scotland, and Ireland. His trip to Bolivia and Peru were a highlight and really changed his life. His golfing trips to Ireland (four trips) and Scotland were also highlights of his golfing career.

Father Tom is survived by his brother, Albert (Skip) Braak of Des Moines; eight nieces and nephews and several cousins. He is preceeded in death by his father and mother, Al and Florence (Murphy) Braak; his brother Bill Braak (wives Lorna and Darlene); and one niece, Nancy Braak.

Father Tom was only at St. Cecilia's Church and School in Ames for one year, but he made a life-time impression on many of our parishioners.. His early departure from Ames was the result of the Franciscans coming to our parish for a 25-year period. Father would stop by regularly in the evening, and he and I would shoot baskets in our driveway. When it was bedtime for our children, they would only allow Father Tom to put them to bed. "Alter Christus--Let the little children come unto me!" We kept in touch after his departure and cherished his substituting at St. Cecilia during his retirement. His humor at the end of Mass was always special. "The pig squealed!" Our sympathy to the Braak Family. Father Tom was one of the greatest individuals we have ever known. Requiescat in Pace!

My deepest heartfelt sympathies for Fr. Braak's family and friends. I remember him well from his days at Nativity Parish in Dubuque. He was loved beyond all measure by the students he taught and the entire parish. He found a corner of all our hearts and found a place to dwell. You will never be forgotten. Fond memories!
Eleanor Hird Sandusky

Father Tom also served the parish of Sacred Heart in Monticello. He was cherished by so many.

I grew up at Nativity Parish in Dubuque, Iowa. Fr. Tom was a young priest at that time and a good friend of our family. I have 8 siblings and our neighborhood had over 100 children. We didn't live very far from Nativity and Fr. Tom would walk to our neighborhood and all the kids would come running. We gathered on our front porch which had a swing. We looked forward to those visits so much. He was always very kind and friendly and touched our hearts forever. We kept in touch over these past years and were very saddened to hear of his passing but know that he is rejoicing in heaven with family and friends to greet him. Fr. Tom you will be missed. Rest in peace in God's embrace.
Judy Sigwarth Hingtgen and the Werner Sigwarth family. 🙏❤🙏

I never knew Fr. Tom on a very personal level, but he was always a delight. Growing up and attending MACS, I have many memories of him and his quick wit. He always kept your attention. When we would go to penance during school, his line was always the longest because he was so easy to talk to and loved by all of us. He touched many, many lives and is now with the Lord. MY condolences to the family.

For Tom was truly an amazing person. Such a nice, nice man. He had been a classmate or my mother's at St Mary's and a playmate in the block. He assisted mass for both of my parents. Within an hour of calling, he came to give my mom last rites and then apologized, saying he would have been there earlier but he had trouble finding all the things he needed. My thoughts and prayers to the family. May you rest in peace with the angels and may the scores always be low!!!

You were very nice and respectful.

Deepest sympathy to Fr. Braak’s family and friends. Will always remember him celebrating Mass at St. Cecilia, Ames and St.Henry’s in Marshalltown. Always enjoyed his humor and jokes. He will be missed. Sincerely, Rita Hayes

Have many wonderful memories of Father Tom. It starts with fact that we were just down the block neighbors when we were young and he babysat for me and my infant sister, Mary. He played in the neighbor gang games. Had the opportunity some time later to join him in golf game in Des Moines and at one of his more northern Iowa parish towns. We had the pleasure of seeing him most years at Margaret's (Lang) family reunions in Marshalltown.
We send sincere condolences to all his family for their loss. Our prayers to all who mourn his passing.
Do hope he gets a chance to play golf where he is now.
Most sincerely, Paul and Margaret Carpenter

Fr. Tom inspired our family in so many ways. Married 5 of our 6 kids, said Mass in our home and my most cherished memory is that of him giving my wife Carolyn, the last rites a week before she passed. He was a great priest, a great man and a true friend. God bless you Fr. Tom -------Bruce Koll & Family

My deepest sympathy to Father Tom's family and many friends. I remember him well from masses at St. Henry's. He will be deeply missed. Rest In Peace. With Love & Prayers, Arlene Jubeck

I will forever cherish all the fond memories of Father Tom. His kindness, gentleness and sense of humor exemplified the true loving man in Christ he was and what we all strive to attain. He was wonderful to all the children he taught about God, and my three children and grandsons were blessed to know him Father Tom was a truly amazing man and friend to many. You are already missed so much God is blessing you in Heaven, and let the golf games continue.

For his brother and others in the Braak family, our deepest condolences. We remember him well as he presided at our wedding Mass 60+ years ago at Nativity in Dubuque. There were three weddings that morning at Nativity. May God welcome this fine priest into the Eternal Kingdom. -- Helen and Dale Kueter, Cedar Rapids

We were so blessed to have you at St. Henry’s and have so many fond memories. Rest In Peace Fr Tom.

When F Tom celebrated the Mass for us at St Cecilia in Ames, I knew I would have a laugh and a joke at the end of the celebration to carry me through the week. F Tom radiated joy in his ministry and I’m sure is even more joy-filled now.

We have lost a truly wonderful man who looked for the good everywhere. I was able to play golf several times the last couple of years which I really enjoyed. My condolences to his family and all his friends and parishioners.

When I first met Father Tom I was angry, but he listened to me and accepted me where I was. Thank you Father Tom for helping me come back home to my Catholic faith.

Father Tom was a true example of Christ. He loved his church family unconditionally. I am so honored to have had the pleasure to know him. I will be forever thankful!

Father Tom was a remarkable man! I knew him as a “golfing friend” and always appreciated his words and his sense of humor! I believe he has achieved his goal of returning to his maker and that gives me peace.

Father Tom may you rest with God & his angels. Thank you for marrying Mike & I. We are forever grateful.

Fr. Tom meant so much to me. His quick wit and easy smile made him so loveable. I always went to him for communal penance. He was so kind and gentle. He will be greatly missed.

I always enjoyed going to Father Tom’s church with my grandparents on Sunday morning. He was such a kind and caring soul and always made me feel so welcome. God bless you, Father Tom!

We loved Fr. Tom and are so grateful for his guidance. Eternal rest.

I am so sorry for your loss. We were married on Aug 12, 1972 by Father Braak. We were telling him how that day was my parents anniversary and the best man’s birthday. He said it was his birthday also. It made our wedding day very special.

Fr. Tom is now in God's presents, blessings to the two saints on earth that lovingly cared for him and welcomed him into their home in his final months of earthly life. Timon and Sandy

Father Tom was a devoted priest and faithful servant to his parishioners. It was a blessing to have Fr. Tom in Marshalltown at St. Henry's Catholic Church. I enjoyed being an altar server with him and fondly remember his jokes at the end of Mass.

I am sorry to learn of Father Tom's passing. He provided much comfort to my family at needed times. He helped the parish a great deal.

Father Tom was such a special and inspiring man and priest. Three major things I learned from him: 1- God loves us so very much. 2- Kill ‘em with kindness. 3- Hate destroys the vessel it is stored in. These have resonated with me throughout my life. Fr. Tom - may you enjoy the greatest of all golf courses!!

Our family loved Father Tom! He made mass so special - kids gathered around the alter, great homilies, a little joke at the end of mass. May Fr. Tom now be playing on the golf course of his dreams! Peace be with you! Joe & Nancy Wauters

Rest In Peace Father Tom. You will be missed by our family. Fly high with the Angels. Let Perpetual Life Shine Upon Him. Sincerely Jim and LeAnn Trowbridge and Family🙏🙏

We love you, Father Tom! Thanks for touching our lives forever! May You Rest In Peace!

The attached photos are added to the memorial of Father Tom Braak 05/07/2021 to help share their legacy.

Thank you for sharing your memory of Father Tom