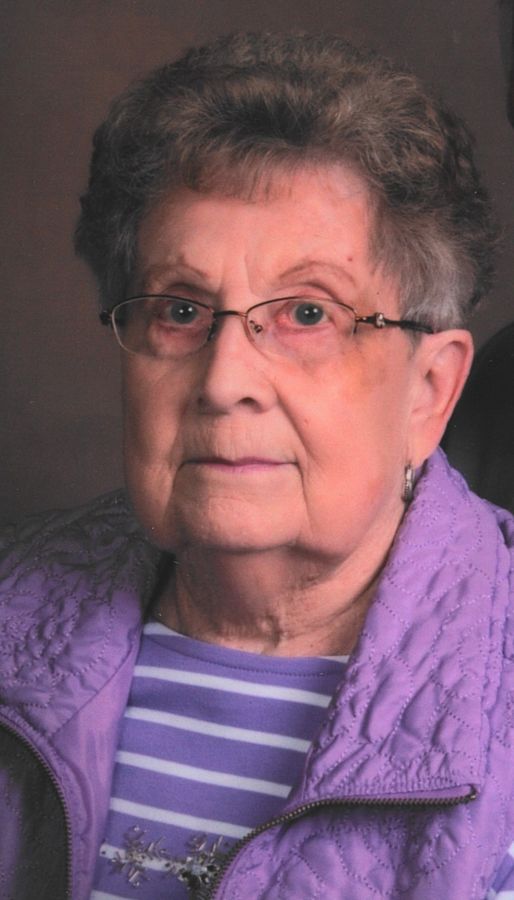 Lorraine was born June 2, 1934, to Leo and Loretta (Kopel) Lemker on the family farm in Lamoille, IA. She was the oldest of three girls, and when she was ten, the family moved to the town of Haverhill, living in the old train depot which had been converted into a house. She graduated from Van Cleve High School and began work as a secretary in the office of Marshalltown High School where she met Richard (Dick) DeVenney. They were married on September 10, 1955. During the early years of their marriage, Lorraine was a dedicated homemaker to the couple's five children. When their youngest entered middle school, she went back to doing secretarial work. She was employed at several different places in Marshalltown including Marshalltown Community College and Wolfe Eye Clinic. She ended her career as the secretary/bookkeeper for St. Henry Parish. Lorraine had a passion for genealogy and traced both her and Dick's ancestors back to the early 1800's. She did some volunteer work for Child Abuse and Prevention Services, and she and Dick enjoyed traveling once he retired. They especially enjoyed taking in all their grandkids' dance recitals and sporting events. She was a member of St. Henry Altar and Rosary Society and the Sew Ladies who made layettes for a mission in Juarez, Mexico.

Lorraine will be missed by her husband, Dick, of 65 years, her daughter, Nancy (Dave) Sanderson of Marshalltown, David of Philadelphia, PA, Steve (Tracy) of Johnston, Tim of Washington, D.C., and Mike (Renae) of Ankeny. She also has eight grandchildren: Cory Sanderson, Kelly Sanderson, Molly (Judd) Harrold, Betsy DeVenney, Luke DeVenney, Emily DeVenney, Kara DeVenney, and Noah DeVenney. She has one great grandchild and one on the way. She is also survived by her youngest sister, Linda (Butch) Krough of West Des Moines, a niece and three nephews. Lorraine was preceded in death by her parents and her sister and brother-in-law, Leila and Clif Randall.

Lorraine always had a smile for us and cared deeply for the people in her life — she wanted to know that everyone was doing well. Her heart was full of kindness. Sending love and condolences to your family.
Marilyn Spence and Family

I spent quite a few days at the Devenney house and a few sleepovers with Steve and Mrs. Devenney was always happy to see us. She was a wonderful lady!!!! Many thoughts go out to the Devenny clan as my prayers are with you. RIP Mrs. Devenney......you were a special lady!!!!

Dick and family, Our prayers and condolence to you and family. Bruce Koll

Sorry to hear about your loss. Thinking of you during this difficult time.

Nancy and Family,
My sympathies to you in the loss of your Mother.

The attached photos are added to the memorial of Lorraine DeVenney 07/03/2021 to help share their legacy.

Please help memorize Lorraine DeVenney 07/03/2021 by recording your attendance below.

Thank you for sharing your memory of Lorraine