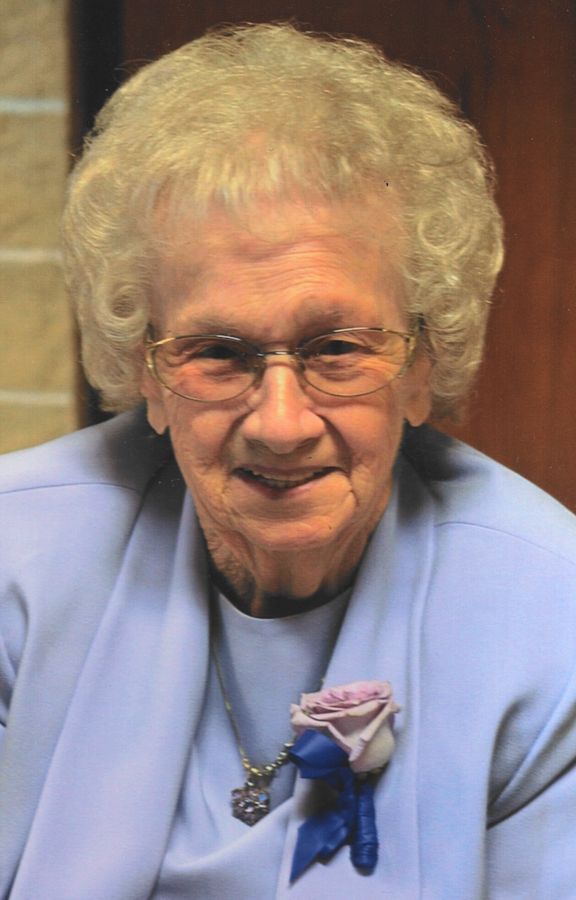 Hildred (Shenkle) Rae Spence was born on a farm north of Collins, IA, to William and Orva (Beals) Shenkle on March 12, 1920. She Was the third oldest of twelve children. She would get up early to help her father with chores and milking of 13 cows by hand before walking to Prairie Flower School that was a one room country school. On June 1, 1941 she married Edwin A. Rae of Colo, where they lived their married life. They had three children, Donald, Sheryl and Pam. A devoted homemaker, her family always came first. Often there were homemade noodles and always homemade pie for Sunday dinner. Her children remember coming home from school being greeted with hot chocolate and freshly baked goodies. Santa cookies were a must at Christmas time with everyone helping to decorate them. When the children were small, she made most of their cloths either by hand or using a singer treadle sewing machine. She made drapes, curtains, and many quilts for their home. One year she made seven grandchildren teddy bears out of feed sacks from companies in the areas where each of them was born.

Ed passed away in 1979. In May of 1984, she married Lowell Spence of Marshalltown. They lived on a farm in Madison County. In 1994 they moved back to Marshalltown. Lowell passed away in June of 2003. In March of 2017 at 97 Hildred fell and broke her hip. After her recovery she was able to return home and lived alone with a lot of help of Pam and family. Hildred was a member of the United Methodist Church, the Colo Good Earth Garden Club, and the Colo Chapter of the Eastern Star. In past years she worked at the Donnelly Corporation in Nevada and Home Furniture in Ames, IA. A long-time antique collector and dealer, she collected many types of things including a large elephant collection. She loved decorating her home, especially for the holidays and summers spent time on her deck enjoying her beautiful flowers and a cup of tea. She cherished the times she was able to spend with her seven grandchildren, ten great grandchildren, and five great-great grandchildren. She was always interested in their activities. Hildred was also a huge fan of all Iowa College Football and Basketball teams.

Aunt Hildred took care of us as young girls when mom and dad were working. She was always kind and we loved spending time with Pam and Cheryl too. I recall she and uncle Ed loved antiques. Wow, she is amazing to have lived to 101.5!

Our thoughts and prayers are with the family at this difficult time.

Cousins 3. I share your sorrow of losing a Mother, a Shenkle sister. Lots of snapshot pictures ran through my mind when I was told of my Aunt Hildred's passing. How afraid she was of storms; her afternoon tea time; her great sense of style; and her laugh, just a little chuckle. Cherish your special memories, knowing the tears will come, but so will the smiles. Sandie Brownifeld Deems

Gina and Pam,
I'm so sorry for the loss of your Mom and Grandma. I seem to remember meeting her at school once and I thought she was delightful. I know you have wonderful memories.
Love, Sally Hansen Sampson

My thoughts of hildred r all happy ones, Frist of all she was a lady with much wisdom, she carried herself with love for her family and her country. She knew jesus as her closes friend. She was truly blessed of God, She saw r nation change some for the good and some not good. But in everything she face a smile , a laugh and the stengh to go on made her the Lady I knew. And loved .I did her hair for at least 20 years . And she was more than a customer she was family. My prayers r for family and hold on to her memories tell them to your children.

I’m one of the Mary Shenkle (Tribby) and Mable Robinson cousins. I remember Hildred and Berneice (and Rena), especially, coming to some of the Collins activities when I was younger. And they were always so friendly and nice to us! Hildred was a special lady - and we will miss her!

I had the pleasure of visiting your mom and grandma several times over the past few months. She was delightful! She loved Pastor Gregg Elcey, but he had retired, so some of us in the congregation are visiting the members who are shut-ins. My, she was bright and fun to visit with. The last time, she said she had done nothing but cough, but, yes, I could visit. We had our usual fun visit, and always closed with the Lord's Prayer. Several years ago I had the pleasure of bringing our circle's goodie bags at Christmas. I believe I did that 3 different Christmases. I will miss her too. She was so intelligent, and 101 years had not slowed her mind down. Blessings and peace to your family. Carol Eddy, Hope United Methodist Church

The attached photos are added to the memorial of Hildred Spence 09/08/2021 to help share their legacy.

Please help memorize Hildred Spence 09/08/2021 by recording your attendance below.

Thank you for sharing your memory of Hildred