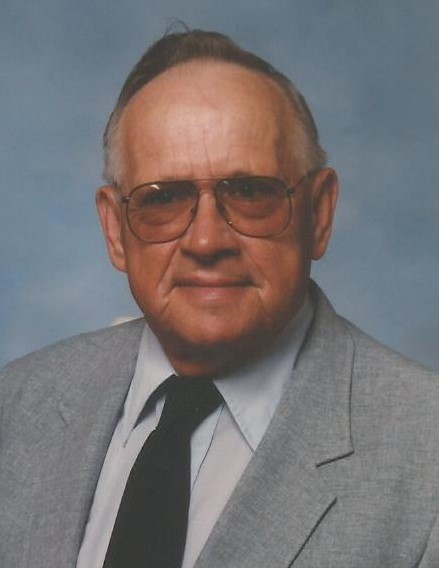 Claude Vokoun, 98, of LeGrand, Iowa, was lovingly met by his Lord and Savior on December 29, 2021 while staying at Grandview Heights Rehab and Healthcare in Marshalltown, IA. Funeral Services will 11:00 a.m., Monday, January 3, 2022 at Le Grand Friends Church in Le Grand. Visitation will be 10:00 a.m., until the time of the service. Officiating will be his son-in-law, Pastor Steven Smallwood. In lieu of flowers memorial contributions may be directed in Claude's name to the LeGrand Friends Church. Online condolences may be directed to www.andersonfhs.com.


On December 31, 1922, in Marshalltown, Iowa, Claude was the first born twin to Edward and Fern (Willits) Vokoun. He was a 1940 graduate from Marshalltown High School and following graduation he served in the United States Navy for two years. Upon returning from his service, he attended Purdue University. On February 21, 1945, he united in marriage to Marian (Reed) in Chicago, IL. They lived most of their married life in LeGrand, IA, but spent several winters in Tucson, AZ. Claude retired from Lennox in 1980 after dedicating 33 years as a faithful worker as a welder. Claude's enjoyment was working in his garden and watching baseball, especially the Chicago Cubs. He also loved fishing, camping with his family, and watching the many beautiful birds that would come to his feeders. After retirement, he spent his Tuesdays enjoying a maid-rite and playing shuffleboard at the senior center. He also delighted in spending his Thursdays at Culvers eating a tenderloin. However, his greatest affection was spending time with his family and faithful companion, his dog Chico.

The attached photos are added to the memorial of Claude Vokoun 12/29/2021 to help share their legacy.

Please help memorize Claude Vokoun 12/29/2021 by recording your attendance below.

Thank you for sharing your memory of Claude